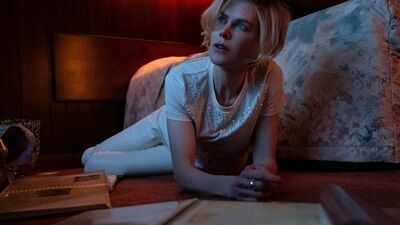 However, most of the other episodes fit more tightly into this half-hour synopsis, and the best episodes of the season are the ones that move completely towards magical realism. “The Woman Held on the Shelf” is the real climax, with Gilpin playing the image-obsessed trophy wife who finds the status literal when her businessman husband (the mild-brutal Daniel Dae Kim) builds a high shelf in his terracotta study for her sit all day and all night. «All you have to do is sit back and be loved,» he coos as we see the existential hell that comes when women literally put on a pedestal. Here Gilpin is fantastic, with a brilliant Chaplinian physicality that she puts to great use both on and off the shelf; The final stretch of the episode, where she discovers the joy of being freed from creating a life for herself (complete with a sundress dance scene on the beach), is one of the best episodes of the entire anthology.

Other strong entries include The Woman Who Got Her Husband Back, in which an elderly Indian woman (the always gorgeous Mira Sayal) decides to get her uninteresting husband (Bernard White) back as if he were a malfunctioning Costco lawnmower. It’s a charming joke about the road not taken and the businesslike nature of romance. In The Woman the Duck Fed, Merritt Wever is shown as a frustrated, lonely woman in her thirties who finally finds the mandak of her dreams (voiced by Justin Kirk), only to gradually discover that he is as passive-aggressive and manipulative as any man on the hunt. And closer to the season, The Woman Who Loved Horses is a delightful Iron Grit-style western about Jane (Fievel Stewart), a young Chinese-American girl who poses as a boy to get revenge on a criminal (Alfred Molina) who killed her father. The real secret sauce to this episode is the ebullient presence of Moonlight Kingdom’s Cara Hayward as Millie, the shy daughter of a preacher who nonetheless accompanies Jane on her journey and proves her incredible resourcefulness. Together they see the brutal way men navigate the Old West and imagine something better for themselves.

While the purposeful concepts of each episode can sometimes be limiting, they give each hour a distinct focus that only occasionally deepens into a lecture. The Woman Who Ate Photographs presents you with the whimsical spectacle of Nicole Kidman devouring Polaroids with the voraciousness of a starving woman, but backs it up with a story of aging, loss, and memory (and gives Kidman the perfect stage partner as Judy Davis as the snarky, dementia-ridden Kidman’s mother). In Cynthia Erivo’s The Woman Who Found Bite Marks on Her Skin, the same tension as Rae’s episode about the restrictions and indulgence faced by black women in professional settings is consistent with the growing difficulties in personal life that working mothers face.